3 years & up. With hat on head and tools in hand, children can enter the world of paleontology through discovery of ancient fossils and dinosaur skulls. Includes 10 fossils, 11 dinosaur skulls, 2 pith helmets (measuring 4.5"H x 10.95"W x 9.90"L each), 2 brushes, and a bucket with tools. All you need to do is add sand! 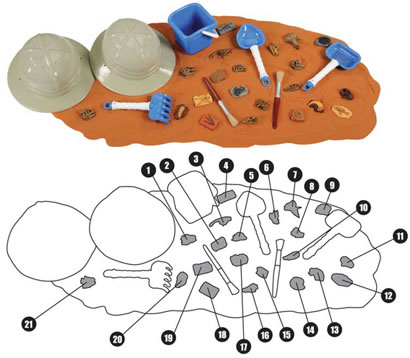 1 - CARNOTAURUS "Meat-Eating Bull" - Slender lower jaws and horns over each eye are two of the puzzling features of this South American canivore. A very deep, yet small skull made this an unusual Cretaceous Age dinosaur.

2 - DINOSAUR SKIN - Cretaceous Age, 65 MYA. This fossil skin impression is from one of the famous fossil "mummies" of a duck-billed Hadosaur which became entombed in sandstone. It was found in North Dakota, USA.

3 - PARASAUROLOPHUS "Near-Crested Lizard" - Some species of this North American duck-billed dinosaur had a hollow crest over 6' long with connections leading to each nostril, suggesting a superior sense of smell.

4 - EURYPTERID - Silurian Age, 450 MYA. A sea scorpion, this predator of trilobites called Mixopterus was found in Norway and is the most scorpion-like. They ranged from 5" to over 7' long.

5 - DILOPHOSARUS "Two-Crested Lizard" - Discovered in China and North America, the double crested skull has puzzled scientists. They might have been used for display purposes by this Jurassic Age meat-eater.

6 - DRACOREX "Dragon King" - Lacking the characteristic domed skull, this "bone-head" dinosaur had a larger number of spikes and horns on it's head than other species. It lived in North America during the late Cretaceous Age.

7 - TRICERATOPS "Three-Horned Face" - The largest of the horned dinosaurs, this enormous skull is one of the most frequent Cretaceous Age dinosaur fossils found in North America. A complete skeleton has yet to be discovered.

8 - BRACHIOSAURUS "Arm Lizard" - One of the largest of all dinosaurs, scientists are divided as to whether the high arched skullactually supported an elephant-like trunk. Their fossils have been found in North America and Africa.

9 - TRILOBITE - Ordovician Period, 450 MYA. One of the most recognizable and widely distributed fossil animals. This species called Raymondites from Canada is distinctive for its tail-spine. The closest living relative may be the horseshoe crab.

10 - VELOCIRAPTOR "Swift Thief" - Scientists have discovered quill knobs on the forearm bones proving that it had feathers like a bird. It lived during the Late-Cretaceous Age in Mongolia.

11 - NIGERSAURUS "Niger Lizard" - A wide mouth with a battery of over 500 small teeth allowed this long-necked plant-eater to vacuum up large amounts of food. The Cretaceous Age skull was found in Africa.

12 - FOSSILIZED FISH - Eocene Epoch 50 MYA. The upturned mouth of this Diplomystus specimen is typical of a surface feeding fish. The Green River limestone deposits in Wyoming, USA have beautifully preserved all the fine details.

13 - VELOCIRAPTOR CLAW - Cretaceous Age, 65 MYA. A large, sickle-shaped claw grew on each hind foot of this "raptor" dinosaur making the animal a very efficient hunter in what is now modern Mongolia in central Asia.

14 - AMMONITE - Jurassic Age, 161 MYA. An ancient mollusk with a spiral shell, this group of marine animals existed for more than 135 million years. This species is called Peltoceratoides and was collected in Russia.

15 - OVIRAPTOR "Egg Thief" - Fossil remains of this Cretaceous Age, Mongolian dinosaur actually contained a lizard skeleton in the stomach area suggesting that it liked to eat more than eggs.

16 - DIPLODOCUS "Double-Beam Lizard" - One of the longest dinosaurs, this Jurassic Age plant-eater had a mouth full of weak, peg-like teeth suggesting that it swallowed food without chewing. Its fossils were found in North America.

17 - GIANT CRABS - Eocene Epoch 45 MYA. Crabs evolved from lobsters in the Jurassic Age. These Pulalius specimens from Washington state, USA are among the finest preserved crab fossils having been buried in sand soon after their deaths.

18 - DINO FOOTPRINT - Jurassic Age, 160 MYA. Dinosaur footprints are grouped into similar types and given generic names. They cannot be attributed to a particular species. Anchisauripus prints were from a small plant-eater found in the state of Connecticut, USA.

19 - FOSSILIZED FROG - Eocene Epoch 45 MYA. This fossil frog of the species Eopelobates is fully articulated and possibly the ancestor of the modern spadefoot toad. This fossil was collected in Wyoming, USA.

21 - TYRANNOSAURUS REX "Tyrant Lizard King" - With a length of 5 feet, T-Rex had one of the largest and most massively built skulls of any meat-eating dinosaur. It's fossils were found in western North America.